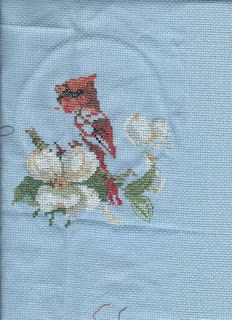 Good afternoon! I know it's been over a month since I've blogged. It's just between the headaches, and my eyes I just haven't stitched the way I use to and I really think this Cardinal looks very sloppy which doesn't help.

It's been a month and a lot has happened during the month. My brother-in-law took a sudden turn for the worse, Sept. 25 and died Sept. 27. (Five years exactly after Dad's funeral as his funeral was Sept. 27, 2013). So it was a sad time for our family, especially my sister and her children and their families. His Memorial Service was this past Monday. Our brother did the service and our nephew-in-law sang Amazing Grace (the modern version). I noticed that our brother was going to talk about Ken being Faithful so I mentioned to Kay I wish I had known as I had a Steve Green tape with the song "Find Us Faithful on it and it would have been perfect. Little did I know our brother, Kenn, mentioned the song at end of service and read the words then played a tape with a group singing the song. Funny how we thought of the same song. Anyway it was good to see everyone in spite of the circumstances. Kay only wanted a small family memorial service for Ken. More showed up then she thought but they were all either related or close to Ken. We had a really nice lunch at their daughter, Heather's house. And their oldest two grandchildren were so cute offering soft drinks to everyone. The next day, Kenn and Denise came into Muskegon and took us out for lunch which was nice. I told them not to wait so long to return to MI. They live in Texas. They said they wouldn't. We'll see.

The fall colors are coming out so the trip to Rockford was pretty. I love the fall colors and this year they will be beautiful. Only problem is I have come down with a cold or is it allergies, this cough is lasting forever. I'm ready to name it. I use to get this every spring and fall, but for so many years I didn't....well, this spring and fall it came back. The frost is coming in this weekend so hopefully that will help get rid of it.

We are continuing to get cats and kittens adopted out. We have been averaging over 1 a day the last few months. Right now a lot of the cats have colds so we are not taking in any more. Plus we are full to the max anyway. On the sad note, the kitten I fostered for a few days in July, I loved. But because he got sick our shelter manager took him home. At that time it was just teething and his gums were infected. That cleared up. But then after that it was one thing after another with him and he went into liver failure so the Vet said enough was enough, they put him down. He was such a sweet cat, we think he may have been born with a problem and no one knew. It could be why he was just dumped off outside our complex to begin with. Anyway he died being loved and had a good short life.

Well, until next time.....Happy Stitching.

Sorry to here about your brother in law and that little kitten, I know they where both loved. Take care of yourself and get better. I too love the Autumn colors. big hugs

What a sad time you have had of late .
Hope life gets better for you soon.
Enjoy your Autumn.

I'm sorry for the loss of your brother-in-law and the kitten. Very sad times! Your cardinal piece is coming along nicely and I hope you're soon feeling well enough to continue the stitching.

So sorry to hear your news, I hope your family is managing ok. Treasure your memories.
I think once you stitch more of the cardinal, it will look better. Although I don't think it looks bad now!

?I was very happy to seek out this net-site.I wished to thanks in your time for this wonderful read!! I positively enjoying each little little bit of it and I've you bookmarked to take a look at new stuff you blog post. online casino

Thank you for this info! Should check also……
sagame66
sagame77
sagame88