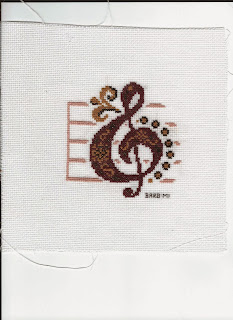 Good afternoon! I finished this a couple of days ago and am just now posting it. It will go to WOCS. Now I'm doing Spring Showers also for WOCS. Once I get the umbrella done the piece will go easy. I knew the umbrella would take a few days and it is.
Not much is happening right now. So until next time.....Happy Stitching
Posted by Barb at 12:51 PM 9 comments: 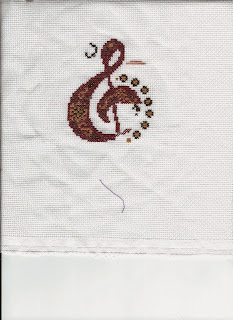 Good afternoon! It's nice and sunny out there. It's cooler today only in 30's but the snow is all gone except for snowbanks, and the sun is shining brightly! It's a beautiful day out there.

I started this piece over a month ago, but never finished it. So this will go in Turtle Trot as a finish Apr. 10. I laid down the Iris to do some TT pieces for now anyway, oh plus a couple of pieces for the ornaments.

I got my printer to work. I was unplugging the wrong cord. Yesterday when my brother came over and asked him to help me make sure I had the right cord. Well, if it happens again, I will know what cord to unplug.

Our church is looking so nice, neat and clean. They are planning a big Easter Sunday so trying to get the church all spruce up. Because I'm allergic to chemicals I couldn't help. They are getting rid of a whole lot of toys from the nursery and children departments. I went in there just to see if they still had toys to play with and they had plenty. What they didn't get rid of today they are donating to charity.

My sister might come back to town Tuesday, but she's thinking of waiting until after she gets home from CO and can stay a day longer. When she comes on Tuesdays she can only stay until Thurs. If she comes on the weekend. She can come Thurs. and stay until Sunday. (She works 3rd shift and works 32 hours a week so she has 3 day weekends). 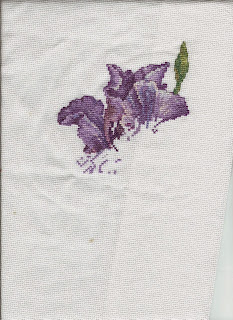 Good morning I think. I'm not sure. I think my scanner/printer quit on me. I was trying to print off a document and it said there was a paper jam so I don't know what I was thinking but I meant to turn off the printer (which you don't need to do) and accidentally pushed the button to copy again, and the printer shut completely down. I can't get it to restart. Any one have an idea how to fix it or do I need to take it in? So I'm not happy with myself. Can't you be allowed to make a stupid mistake in the world of computers? Guess not. So this may be my last blog for awhile until I can fix it or take it in.

Anyway here is progress on Iris by Paula Vaughn. I am so enjoying this piece.

I also am enjoying seeing the snow melt little by little. And having the days get longer. I can tell spring is coming as already allergies are coming up. I'm not the only one having a problem.

Well...I need to get some housework done, starting with dishes, then vaccuuming, clean the bathroom. Well in my head I'm doing them, so guess I better get started. Until next time Happy Stitching!
Posted by Barb at 9:31 AM 9 comments: 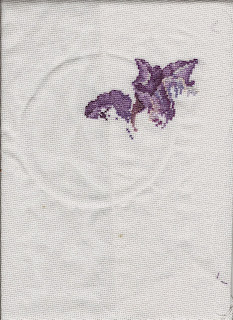 Good afternoon. It is such a nice, sunny day out there. It's been a nice weekend weather wise. It's great to see the snow melting little by little. Tomorrow is suppose to be 60 then Tues. back in the 40's. Forty's is still above freezing. So nice compared to a little over a week ago. Well, the sub zeros and below 20's are done for the season. We will have morning lows in the 20's according to the forecast but warm up to 40's by end of day. We know this is only March and we can still have a good snowstorm in April. Boy March is going by quickly.

I do have a case of spring fever and these Irises make me think Spring. Also makes me think Easter! I love these, they are so pretty and going pretty good now. At first I felt like I wasn't making any progress but now I am. I love stitching these. But I have a problem, right now there are so many projects I want to do. Someone sent me a graph of Mighty Mouse and someone else sent Spider Man, and I'm anxious to start them, plus a couple of other pieces. I know these Irises and the Gymnasts are going to be TT pieces, since there is no deadline on them. Whereas I do need to get more ornaments done for this summer.

Yesterday I went to Faithful to Felines to work. Remember last week I said Neeson got adopted. Well he was returned just two days later! The lady said he wouldn't eat, wouldn't drink, wouldn't use his kitty litter, he just stayed in a corner and meowed a lot. I told when she took him to give him time to adjust and she responded, "I know, I've had cats all my life." Anyway he seemed happy to be back. I really think he missed his cat friends, and didn't like being an only cat. Maybe he needs to be adopted with another cat. Whatever. She should have given him more time he would have adjusted. I was glad to see him though as he is one of my favorites.

This may be a long spring season, my sinuses are really acting up. I can't get rid of this cough for anything. I had made an appointment with my ENT earlier. Maybe I can get him to give me Prednizone for a couple of weeks, my sister said that worked on her. 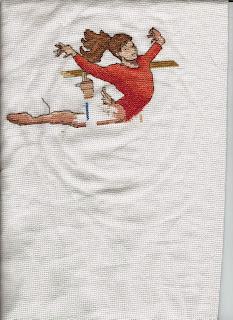 Good afternoon. We are enjoying great weather right now, it's going to be in upper 30's and 40's all week. The snow is slowly melting. Still has a long ways to go though. My cat is really enjoying that sun. He lays up on his cat tree or next to the patio door right where the sun can hit him.
This piece is a little crooked sorry. It will go to my niece, Addison, who loves gymnastics. Only this pattern isn't easy. It has so many quarter stitches it isn't funny. As it is I made a mistake but cannot figure out where. I hate it when that happens. So I guess I will do a little improvising.
Last Saturday some of our cats from Faithful to Felines were taken out to Petco to hopefully get adopted. They had a great day out there that day, about 8 cats got adopted. (Some of them were in foster care. But 4 from Faithful 2 Felines got adopted. Three of them were from the two room I like to do, and I just knew Lollipop, Nina, and Carina would get adopted and they did. We had one cat adopted from the shelter too. The lady came wanting to adopt a couple of other cats from one of my rooms, so they came and got me. Only neither Sunny nor Cloud wanted any part of her, but Neeson was all over her, so she went home with Neeson. So needless to say I was on cloud 9 Saturday. Especially when I heard the other 3 got adopted along with others out at Petco. Unfortunately the shelter cats don't get to go out to Petco too often.
Oh about Turtle trot this month. It didn't happen. I just got caught up in other stitching so I really won't have anything. But I have a feeling this piece will be turning into a Turtle Trot. I started it intending it to be one. It will be worked on every month. Or most months. I have an Iris piece that will also be added to TT this year. I'll start that soon. Well--until next time Happy Stitching!
Posted by Barb at 4:16 PM 6 comments: 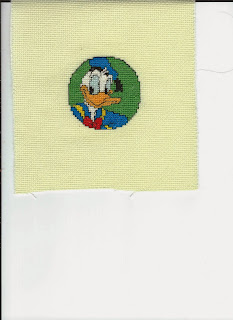 This was a very quick finish to be made into an ornament later this summer.
Posted by Barb at 5:15 PM 7 comments: