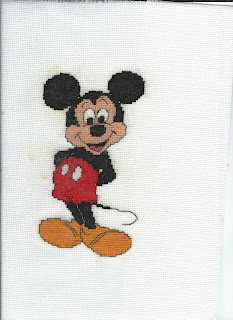 Good Morning. I love this weather we are having. Not quite spring but at least no snow! I'm not naive enough to think we won't get any more snow for rest of season, we're not in clear until mid April or a little later.

I finished Mickey Mouse piece and have given it to a friend who likes Disney things. Now I'm doing another easy piece by Brittercup Designs called Lucky Cat. That too is very easy

In Feb we adopted out 43 cats which has to be a record for us. Last year was a really good year from us as far as cat adoptions and this year so far is even better. Petco is having an adoption event this year and gives so much money per a cat adopted as long as we do 5 adoptions so Barb (not me another Barb) took a bunch of kittens out there plus some cats. We should get at least 5 adopted out over the weekend. Although another organization was taking about 60 kittens out there so we'll see. Right now we don't have 60 kittens and not all the kittens are ready to be adopted. But kitten season is coming right around the corner. Last year we took in over 300 kittens and their mothers, most of the kittens were adopted some of the mothers.
This year they said we would not take in that many, they are going to put a limit this time. May be easier said then done.